The Purely Pleasure series is about the lives and loves of the ladies working at Purely Pleasure, the hottest sex toy company around! From CEO’s, to executive assistants, to store managers, these heroines are working hard to make their career dreams come true…but what about their love lives?

Expect quirky heroines who occasionally get stuck in hilarious situations, heroes that range from billionaire inventors to wild mountain men to hot-as-heck firemen and as always, steamy and emotional love scenes.

Each book in the Purely Pleasure series is a standalone novel centered around a different couple. While they can be read in any order, the series starts with All Worked Up.

Nothing is going Maddy’s way: she just lost her job, her landlord is a lecherous nightmare and three months ago, her boyfriend dumped her and the reason why haunts her: Your libido is out of control for a girl.

Those words have been circling in her head ever since.

When a job working on a new subscription box—chock full of fun for his and her pleasure— falls into Maddy’s lap, she thinks the universe is laughing at her. And when she gets a look at the jaw-droppingly handsome owner of Purely Pleasure, she knows it.

Carter Daniels understands passion. The inventor and reluctant CEO has made his name—and his fortune—on creating some of the hottest toys on the market. When the delectable Maddy’s hired as the company’s new social media manager, Carter tells himself to stay away, no matter how much the spirited brunette tempts him.

But at the company retreat, Carter overhears a tipsy Maddy confessing her ex broke things off because of her high libido. Now Carter can think of nothing else.

Maddy’s curves and quiet strength have got Carter all worked up…now it’s his turn to show her what it’s like with a man who can’t just keep up, but stay up.

When Natalie’s boss asks her to shepherd an old friend to a black-tie event to meet investors, she doesn’t expect to be escorting a six and a half foot tall mountain man with a beard as golden as his eyes.

Rhett Oakes is looking to expand River Run—the lodge he inherited from his Grandfather—and he needs a lot of cash to turn the rustic piece of property into a luxury retreat for the Pacific Northwest’s wilderness lovers.

When his old college roommate offers him an invite to the Black and White Ball which key investors are attending, Rhett drops everything and flies to New York for the opportunity. He’s not expecting a wild-haired beauty in three inch heels waiting for him at the airport.

Nat Banks is the kind of woman Rhett’s gone out of his way to avoid. Beautiful. Talented. Smart as hell. And never leaving the city behind.

She’s nothing but trouble for a mountain man like him—but for tonight, she’s on his arm.

He just needs to make sure she doesn’t end up in his bed.

ALL DRESSED UP is a short, steamy prequel story featuring characters from the Purely Pleasure Series! It’s full of will-they-or-won’t-they fun, complete with jokes about lumberjacks, more than one scene involving a hot man in a tux and inappropriate thoughts about beard burn. 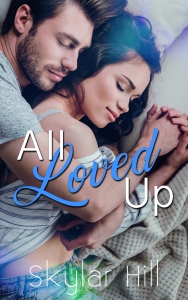 Natalie Banks has come a long way from her country girl roots. This cattle rancher’s daughter is on top: as the CEO of Purely Pleasure, she’s doubled the company’s profits and launched a subscription box of toys that’s the hottest thing on the market.

Rhett Oakes left the hustle and bustle of city life behind years ago and never looked back. As the owner of one of the most popular wilderness retreats in the Pacific Northwest, he’s tells himself he’s got everything a man could ever want: the woods, the mountains, and the wild animals he works to rehabilitate.

When Timothy Durbin, his new neighbor, challenges Rhett’s right to a water easement that straddles their two properties, Rhett’s entire livelihood—and the land he loves—is at stake. To appease a still-on-the-books law from the 1880’s, Rhett can’t legally hold the water rights if he’s a single man.

He needs to find someone to marry or his business must close while his lawyers fight it out in court.

Enter Nat. Nat, who runs his best friend’s company. Nat, who is beautiful, bombastic, and tempting as hell.

No matter how much he wants her, Rhett’s always resisted taking their friendship to another level. A city girl like her could never live the life he wants—but when Nat finds out his predicament, she makes him an offer he can’t resist.

Nat tells herself it’s just one friend helping out another. It’s not a big deal. But as Durbin ramps up his campaign, she’s forced to move in with Rhett to quell suspicions and questions as the court case begins.

Now Rhett’s livelihood hinges on the two of them acting all loved up. But it takes just a few steamy kisses and one moonlit skinny-dipping session to make Nat wonder if either of them are acting. But a marriage that started out fake can’t turn real…right?